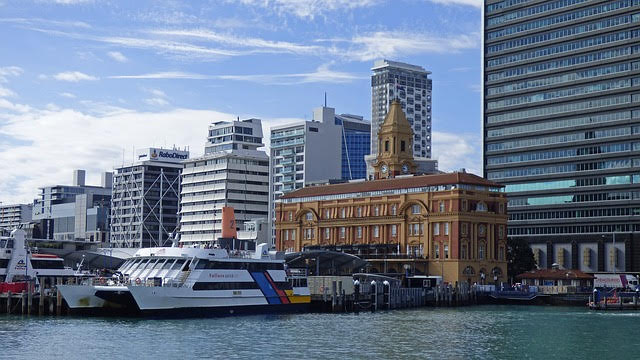 National travel, how to tour your own country, the design way!

When will we be able to travel again!? The question that has been on many Kiwis minds for the last year and a half still appears to have no timeline in mind. Even though New Zealand has opened up its borders to Australia and the Pacific Islands, it’s pretty apparent that travel won’t be “the same” for some time yet. So, many Kiwis have taken to touring and exploring their own backyard; for fun and to help keep the tourism industry alive!

So, if you’re thinking of packing up the car for an ultimate roadie, we have put together a list of the five notable buildings you should visit in your own Backyard!

Built in 1912 in an Edwardian Baroque architectural style, the Auckland Ferry Terminal is a must-see. So many of us have been in and around this building. Still, we may not have absorbed the true beauty and history of the space—the yellow-toned Auckland Ferry Terminal has been classified as a historic building by Heritage New Zealand. So head down to the terminal, get yourself a scoop of Icecream and explore!

This monumental building was designed by the Scottish architect Sir Basil Spence. This building is also a notable heritage building and took ten years to build, from 1969-1979. Interestingly, the interior is just as enthralling as the exterior. You can take a guided tour of this landmark from 10-4 daily or peruse on your own from 9-5.

Built between 1994-1997, this landmark holds a unique title; “the tallest freestanding building in the southern hemisphere. Take that, Australia. Measuring at 328m, it has become a beloved landmark for tourists and an icon of New Zealand’s biggest city. Time to test your fear of heights and try out the glass-bottom viewing deck!

A fan favourite, the Christchurch Cathedral broke ground in late 1864. Unfortunately, due to lack of funds, construction ceased in 1865 and wasn’t completed until 1904. However, since then, this building has been through A LOT. Most notably, extensive earthquake damage from the Christchurch Earthquakes in February 2011. The Cathedral is currently set to be restored, but it will take some time to be fully completed.

Auckland Town Hall is one of those places that house “the best of both worlds” with both administrative functions and many joyous celebrations. The Great Hall is commonly used for Graduation ceremonies and performances, even the likes of The Beatles, The Rolling Stones, and Elton John! Another thing that makes this building special is that it houses the Town Hall Organ, which is actually the largest musical instrument in the country that is deemed a “Protected Object” under New Zealand law. It is quite magnificent!

Which of these will you be visiting next? Or perhaps re-visiting?

Previous Article: Out with the old in with the new- But what about our Historic Homes!?
Next Article The Return of The Kiwi; A New Hope for Homebuyers?